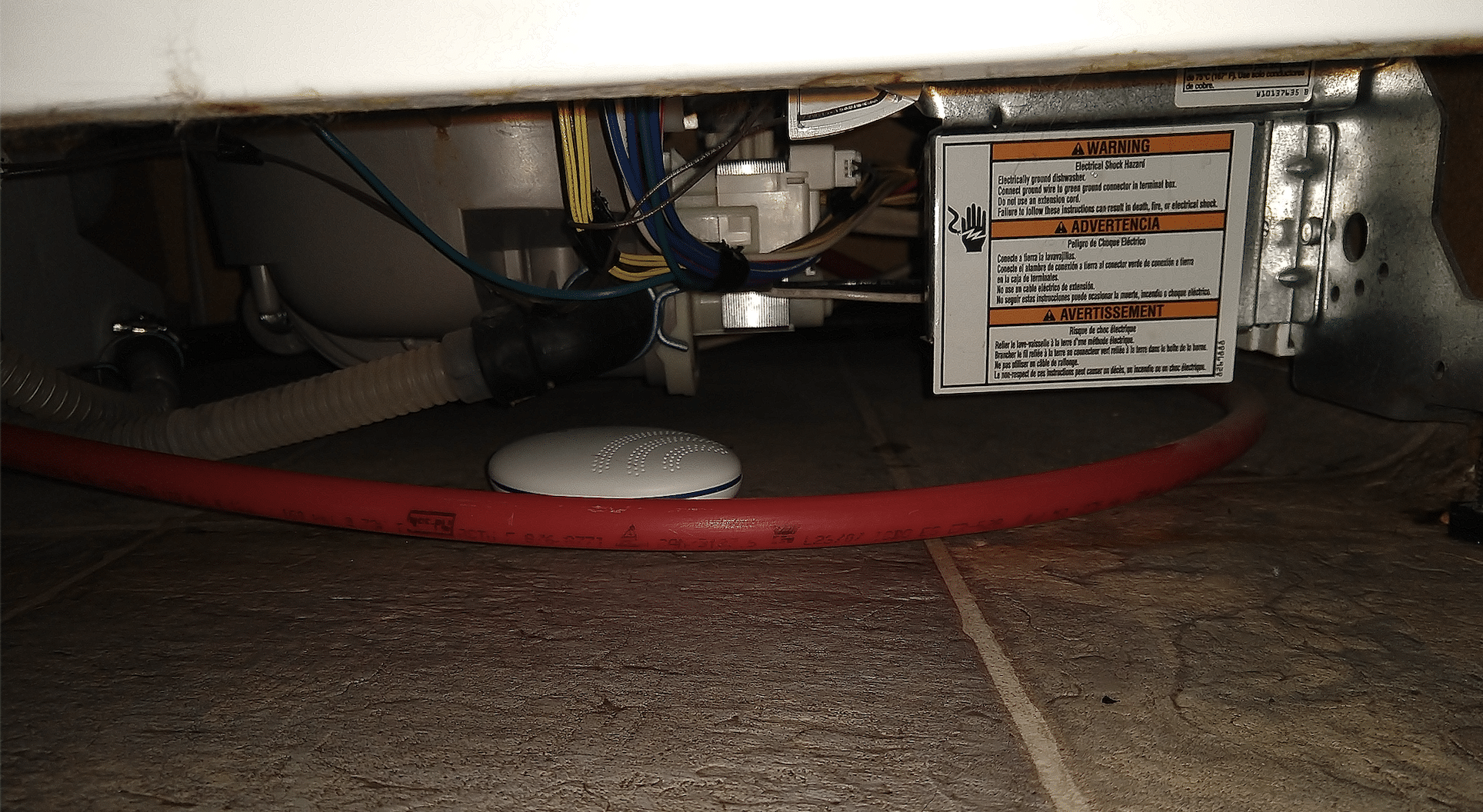 Just a testimonial, because I’m a fan.

I installed two ROOST “Water Leak & Freeze Detectors” recently, one under my dishwasher and another under my refrigerator (with ice maker). Both were nicely packaged, well-designed and well-made, easily linked to my wifi, and simply placed under the appliances, out of sight behind the front panels. The Roost app was simple to understand, and I made appropriate adjustments to temperature and humidity alarms after the first day of use.

Dishwasher leak! Within six weeks of sensor placement, a splash shield failed at the bottom of the dishwasher door on my eight-year-old dishwasher. The dishwasher was on a delayed-start cycle, and after bedtime we heard a beeping alarm and then received a phone app notification for the dishwasher sensor. Initially, I thought that the humidity sensor alarm level needed adjustment, and so I increased its value to 70%, but when the alarm returned a few minutes later I dragged myself out of bed, stopped the dishwasher cycle, and opened the dishwasher front panel to have a look. The sensor was beeping still, and with a flashlight I saw that it was indeed sitting in liquid water! Quick response allowed only about a cupful of water to leak before I could stop the dishwasher, but if the sensor had not been in place, the cycle would’ve continued for another hour, with maybe a gallon or more spilling out. But without the sensor, even this small cupful of water would have been undetected, since it remained behind the front panel and puddled backward, into the dishwasher cavity. Despite the intact vinyl floor covering protecting the wood flooring underneath, this cupful might have allowed molds to form or corrosion to accelerate, and a larger amount would’ve stained the cabinet base and perhaps leaked onto the wood flooring. Crisis averted!

The sensor beeped audibly until I dried its sensor pads, then it reset and returned to normal operation. The Roost app sent an automated inquiry whether the alarm was due to testing or to an actual event, so I answered the inquiry with a single click, and I was bothered no more. Meanwhile, I sopped-up the leaked water and allowed the vinyl floor to dry. The next day, being somewhat handy, I studied the leak and found the failed splash shield at the bottom of the dishwasher door. Since the splash shield in this dishwasher was not replaceable, the dishwasher has now been replaced in its entirety. And the Roost sensor is again returned to its position, silently monitoring and recording the temperature and humidity readings in the dark. It’s comforting to me to check the Roost app now and then, where it not only says quite clearly, “Everything is fine,” but also allows me to see a strip chart of temperature and humidity readings recorded for the past week.

I write this testimonial, because the ‘infamous leaking dishwasher coincidence’ has now been told to my friends and family, and I’m happy to congratulate you on a truly useful IOT device. Well done!

Let's Get in Touch

Talk with our team to learn more about Roost insurance solutions. Are you looking for product help or support? Contact us here